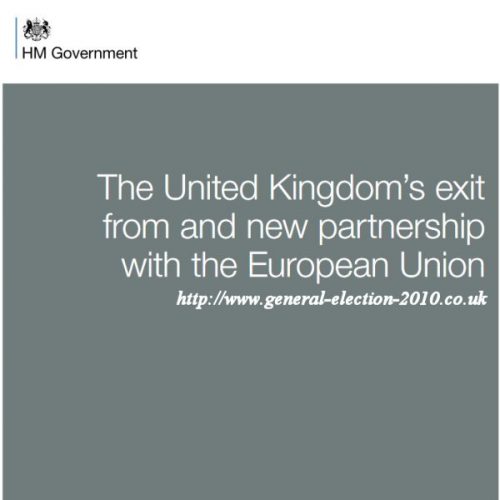 Foreword by the Prime Minister

Preface by the Secretary of State

1. Providing Certainty and Clarity – We will provide certainty wherever we can as we approach the negotiations.

2. Taking Control of Our Own Laws – We will take control of our own statute book and bring an end to the jurisdiction of the Court of Justice of the European Union in the UK.

3. Strengthening the Union – We will secure a deal that works for the entire UK – for Scotland, Wales, Northern Ireland and all parts of England. We remain fully committed to the Belfast Agreement and its successors.

5. Controlling Immigration – We will have control over the number of EU nationals coming to the UK.

8. Ensuring Free Trade with European Markets – We will forge a new strategic partnership with the EU, including a wide reaching, bold and ambitious free trade agreement, and will seek a mutually beneficial new customs agreement with the EU.
The UK Economy
European Union Agencies

9. Securing New Trade Agreements with Other Countries – We will forge ambitious free trade relationships across the world.

10. Ensuring the UK Remains the Best Place for Science and Innovation – We will remain at the vanguard of science and innovation and will seek continued close collaboration with our European partners.

11. Cooperating in the Fight Against Crime and Terrorism – We will continue to work with the EU to preserve European security, to fight terrorism, and to uphold justice across Europe.

12. Delivering a Smooth, Orderly Exit from the EU – We will seek a phased process of implementation, in which both the UK and the EU institutions and the remaining EU Member States prepare for the new arrangements that will exist between us.

The Government has made clear that we will honour the choice that the people of the UK made on 23 June 2016; the UK will leave the EU. We will seek an ambitious future relationship with the EU which works for all the people of the UK and which allows the UK to fulfill its aspirations for a truly global UK.

On 23 June 2016, the people of the UK voted to leave the EU. This Government will carry out their will. We are confident that the UK can have a successful and independent future outside the EU, which works for all the people of the UK, regardless of how they voted in the referendum. In seeking such a future, we will look to secure the specific interests of Scotland, Wales and Northern Ireland as well as those of all parts of England.

This Government will make no attempt to remain in the EU by the backdoor, nor will we hold a second referendum on membership. Instead, the strategic partnership which we seek will underpin free trade between the UK and EU, recognising the deep integration and harmonisation that we have achieved as members of the EU, as well as the closest possible cooperation on key issues like security, foreign policy and science and technology – as we have set out in this White Paper.

We will honour the UK’s profoundly internationalist history and culture by building a truly global UK. And we will use this historic moment of change to build a stronger economy and a fairer society by embracing genuine economic and social reform.

It remains overwhelmingly and compellingly in the UK’s national interest that the EU should succeed. Our vote to leave the EU was no rejection of the values we share. The decision to leave the EU represents no desire to become more distant to our friends and neighbours in the EU. It was no attempt to do harm to the EU itself or to any of its remaining Member States. Rather, the vote was driven by a desire to restore our own parliamentary democracy, national self-determination and to become even more global and internationalist in action and in spirit. We certainly do not want to turn the clock back to the days when Europe was less peaceful, less secure and less able to trade freely.

So we will continue to be reliable partners, willing allies and close friends. We want to continue to trade with the EU as freely as possible, to cooperate to keep our countries and our citizens safe, to promote the values the UK and EU share – respect for human rights and dignity, democracy and the rule of law both within Europe and across the wider world, to support a strong European voice on the world stage, and to continue to encourage travel between the UK and the EU. The EU will continue to be, for many of its Member States, a key driver for positive change and reform.

And this strong partnership between a sovereign UK and a thriving EU will be at the heart of a new global UK: a UK which will emerge from this period of change stronger, fairer, more united and more outward-looking than ever before. A UK which is secure, prosperous and tolerant – a magnet for international talent and a home to the pioneers and innovators who will shape the world ahead. A truly global UK – the best friend and neighbour to our European partners, but a country that reaches beyond the borders of Europe too. A country that goes out into the world to build relationships with old friends and new allies alike.

© Crown copyright 2017
This publication is licensed under the terms of the Open Government Licence v3.0 except where otherwise stated. To view this licence, visit nationalarchives.gov.uk/doc/open-government-licence/version/3 or write to the Information Policy Team, The National Archives, Kew, London TW9 4DU, or email: psi@nationalarchives.gsi.gov.uk

Where we have identified any third party copyright information you will need to obtain permission from the copyright holders concerned.

This publication is available at www.gov.uk/government/publications

Any enquiries regarding this publication should be sent to us at publiccorrespondence@cabinetoffice.gov.uk
Print ISBN 9781474140652
Web ISBN 9781474140669
ID 01021701 02/17 52309
Printed on paper containing 75% recycled fibre content minimum
Printed in the UK by the Williams Lea Group on behalf of the Controller of Her Majesty’s Stationery Office