The Queen’s attempt to dip her paws in the taxpayers pocket, but is denied by Chancellor George Osborne.

In Chancellor George Osborne’s Emergency Budget 2010 he refuses to give the queen a pay rise of £7.9 million, it is quite a no-brainer that if the country is in recession and money is tight you don’t ‘beg’ for more.

I think that the royal family should collect some of those all so elusive pennies, buy a dictionary look up Recession in the R’s Because I don’t think they know the meaning of the word.

I’m just glad that George Osborne didn’t let her steal £7.9 million from the public and it was invested into something that actually needs the money.

I pulled together a political cartoon to address her unusual behaviour. 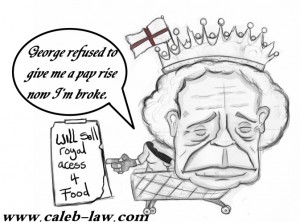