It’s been reported that in October 2009 the BNP leader, Nick Griffin, who was elected to the European parliament in June 2009 will appear on the BBC’s Question Time program.

Many in politics see this as a BIG mistake, personally I think hiding your head in the sand while the BNP preach ‘watered down’ hate policies door to door is a big mistake, so I for one support the BBC’s decision to allow the BNP leader Nick Griffin to participate during Question Time and hope to see more of the BNP in main stream media. 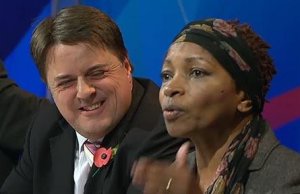 The British National Party gained two seats in the June 2009 European election which means they do have a voice amongst the British people. Yes, many will argue a vote for the BNP is a protest vote, but it is a vote and since they have gained enough votes to gain 2 MEP’s, they have a right to be heard.

Whenever I think of the BNP in power (any power) it scares the crap out of me, Adolf Hitler was a member of a little supported German party until financial strife and a lot of protest like voting gained them a little power. Through very poor political decisions in Germany, the Nazi party gained power.

I’m not saying the BNP are the same as the Nazi Party, the link is where a country in crisis (Germany was in depression, we are in a recession) will vote for stupid things not realising where it may take them long term!

Sine our political system is open and we can’t ban the BNP from running candidates, the only way to deal with this sort of fascist party with a racist leadership is through reasoned debate.

If we don’t confront them in the national media (Question Time for example) how can we see them for what they truly are?

It will leave the BNP to spread their hate at grass roots level where some of the UK public are in crisis and open to apparently easy solutions (like expelling all immigrants will solve our job shortages) to hard problems.

I look forward to the debates on BBC’s Question Time next month and hope it’s not ruined by UAF protesters.