We want to secure the status of EU citizens who are already living in the UK, and that of UK nationals in other Member States, as early as we can.

6.1 Around 2.8 million EU nationals[16] were estimated to be resident in the UK, many of whom originate from Poland.[17] It is estimated that around 1 million UK nationals are long-term residents of other EU countries, including around 300,000 in Spain. France and Germany also host large numbers of British citizens.[18] 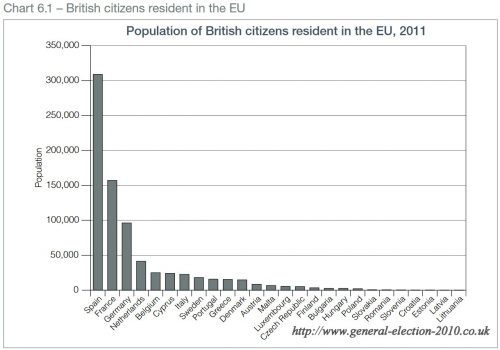 Population of British Citizens Resident in the EU, 2011

6.2 While we are a member of the EU, the rights of EU nationals living in the UK and UK nationals living in the EU remain unchanged. As provided for in both the EU Free Movement Directive (Article 16 of 2004/38/EC) and in UK law, those who have lived continuously and lawfully in a country for at least five years automatically have a permanent right to reside. We recognise the contribution EU nationals have made to our economy and communities. 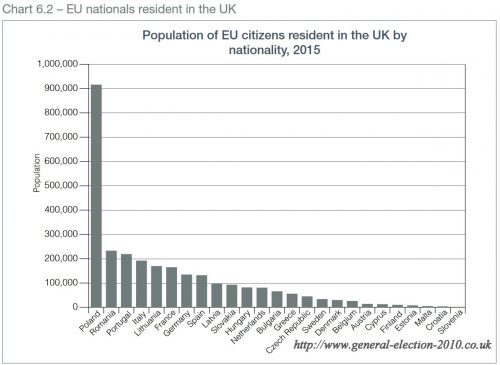 Population of EU Citizens Resident in the UK by Nationality, 2015

6.3 Securing the status of, and providing certainty to, EU nationals already in the UK and to UK nationals in the EU is one of this Government’s early priorities for the forthcoming negotiations. To this end, we have engaged a range of stakeholders, including expatriate groups, to ensure we understand the priorities of UK nationals living in EU countries. This is part of our preparations for a smooth and orderly withdrawal and we will continue to work closely with a range of organisations and individuals to achieve this. For example, we recognise the priority placed on easy access to healthcare by UK nationals living in the EU.

We are also engaging closely with EU Member States, businesses and other organisations to ensure that we have a thorough understanding of issues concerning the status of EU nationals in the UK.

6.4 The Government would have liked to resolve this issue ahead of the formal negotiations. And although many EU Member States favour such an agreement, this has not proven possible. The UK remains ready to give people the certainty they want and reach a reciprocal deal with our European partners at the earliest opportunity. It is the right and fair thing to do.