By leaving the EU we will have the opportunity to strike free trade agreements with countries around the world. We will be champions of free trade driving forward liberalisation bilaterally, as well as in wider groupings, and we will continue to support the international rules based system.

Strengthening trade with the world

9.1 The UK is proud of its long and successful history as a trading nation. As Chart 9.1 shows, the UK has seen steady growth in overall trade as a percentage of GDP in the entire post-war period.[69] We have long been a strong supporter of global trade liberalisation and of the rules based system for trade. An international rules based system is crucial for underpinning free trade and to ward off protectionism.

9.2 The UK in terms of creating and deepening the Single Market or securing free trade agreements with other nations. We will continue to support the EU’s trade agenda while we remain a member.
After we leave we will look to increase significantly UK trade with the fastest growing and most dynamic export markets in the world. The EU remains an important trading partner for the UK, but the importance of other markets outside the EU has been increasing in relative terms. The share of UK exports to the EU has declined from 54 per cent in 2000 down to 44 per cent in 2015.[71] Furthermore, annual growth in UK exports to the EU (around 2.5 per cent between 2005/2015) has lagged behind annual growth in global exports (over 4 per cent between 2005/2015).[72] As can be seen in Chart 9.2 below, the United States is our single biggest export market on a country-by-country basis.

Chart 9.2 – Share of UK exports of goods and services to top 10 export markets 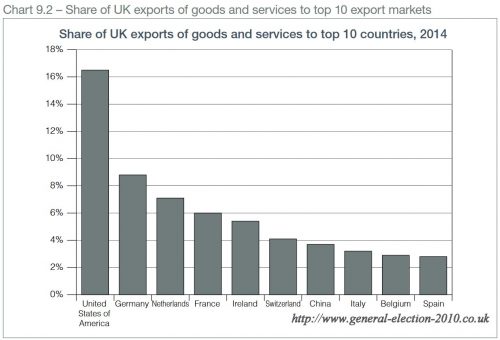 Share of UK Exports of Goods and Services to Top 10 Countries, 2014

9.3 Increasingly, we are trading with the key emerging markets of the world in Asia and the Americas. As Chart 9.3 shows, the UK’s fastest growing export markets between 2005 and 2014 included South Korea (13 per cent per annum), China (17 per cent per annum) Brazil (12 per cent per annum) and Mexico (9 per cent per annum).[74] Trade with developing nations has increased, with many being importers of UK goods as well as key suppliers in UK supply chains. The UK’s total trade with the 80 plus developing countries that receive trade preferences to the EU[75] was approximately £19 billion in exports and £27 billion in imports in 2015.[76] 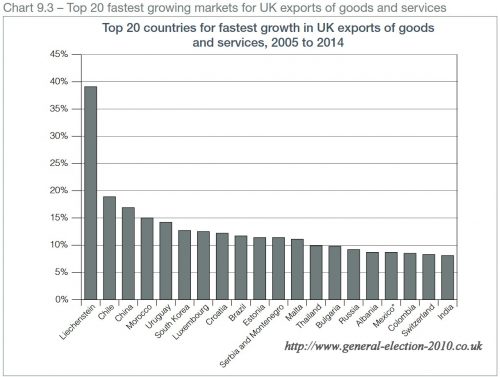 Investment stock, having passed the £1 trillion level in 2014.[78] Investors remain confident in the UK and according to major independent reports, the UK is the number one destination for Foreign Direct Investment in Europe.[79]

9.5 After leaving the EU, the UK will build on these strengths and our historic role as a global trading nation to realise the opportunities available to us. By boosting trade and opening markets and attracting the world’s most successful companies to invest in the UK, we will create jobs and enhance productivity and GDP. Increasing competition and encouraging businesses to innovate enables suppliers to access higher quality and cheaper products in their supply chain and gives consumers more choice and lower prices.

9.6 Our approach to trade policy will include a variety of levers including: bilateral FTAs and dialogues with third countries, participation in multilateral and plurilateral negotiations, market access and dispute resolution through the WTO, trade remedies, import and export controls, unilateral liberalisation, trade preferences and trade for development.

9.7 Without the need to reflect the positions of the EU27, an independent trade policy gives us the opportunity to strike deals better suited to the UK and to make quicker progress with new partners, as well as those where EU negotiations have stalled.

9.8 Work is underway to define the Government’s approach to trade policy. In due course the Government will want to consult business and other interested parties on the detailed positions it should adopt.

9.9 We have established a Department for International Trade, with a mission to drive up UK trade and investment in the delivery of its objectives:
1. promoting and supporting UK exports of goods and services to deliver a growing economy that works for everyone;
2. maximising wealth creation through supporting Foreign Direct Investment and Outward Direct Investment; and
3. delivering the best international trading framework for the UK.

9.10 This department will lead the UK’s ambitions for deepening trade and investment relations with the wider world. Many countries including China, Brazil, and the Gulf States have already expressed their interest in enhancing their trading relationships with us. We have started discussions on future trade ties with countries like Australia, New Zealand and India.
The new United States Administration, the world’s biggest economy,[80] has said that they are interested in an early trade agreement with the UK.

9.11 We are also seeking to achieve continuity in our trade and investment relationships with third countries, including those covered by existing EU free trade agreements or EU preferential arrangements. We are exploring with our trading partners ways to achieve this.

9.12 While we cannot agree new trade deals until after we have left the EU, there is much that we can do to prepare and to achieve now, while respecting our obligations as members of the EU. The Department for International Trade’s International Trade and Investment division (ITI – formerly UK Trade and Investment) provides access, support and advice to UK business, both in the UK and abroad, with over 2,700 staff working across the UK and 108 markets overseas. Our global network is located in UK embassies and consulates, allowing DIT staff and UK diplomats to share networks, influence and resources. It also works in collaboration with the devolved administrations to help promote the UK’s exporting capability as a whole.

9.13 In addition the UK can prepare the ground for our exit from the EU through discussions with current EU trade partners so as to deliver maximum continuity and certainty for businesses once we leave, as well as to ensure continued preferential arrangements for developing countries.

9.14 The UK will also host the inaugural Commonwealth Trade Ministers’ Meeting in March 2017, ahead of hosting the Commonwealth Heads of Government Meeting in 2018. The Commonwealth has 52 member countries, including some of the world’s fastest growing. It accounts for more than two billion people and spans six continents. In 2015, intraCommonwealth trade was valued at almost $700 billion.[81]

9.15 UK Export Finance (UKEF) provides a diverse range of products and advice to ensure that no viable UK export fails for want of finance or insurance from the private sector. It can help UK exporters secure deals, perform their contractual obligations and get paid. UKEF has provided a total of £15 billion of support for exporters in the last five years.[82] In the last financial year alone, UKEF supported 279 companies, of which 77 per cent were small and medium-sized enterprises. This number rises to 7,000 when you include those companies in the UK export supply chain that indirectly benefited.[83]

9.16 The UK is a founding member of the WTO and has been a member of the General Agreement on Tariffs and Trade since 1948. Our WTO membership will form the bedrock on which we build our future trade relationships. It secures access rights to other members’ markets, provides a framework through which those rights can be enforced and provides a common rules-based approach to commerce across all WTO members that businesses can understand and rely on.

9.17 As part of leaving the EU the UK will need to establish our own schedules covering trade in goods and services at the WTO, providing clarity for UK business about their access to overseas markets around the world and also providing a clear basis for negotiating new trade agreements, not just with the EU, but with old friends and new allies from outside Europe too.

9.18 As the Secretary of State for International Trade informed Parliament on 5 December 2016, work is already underway on this. Our aim is to establish our schedules in a way that replicates as far as possible our current position as an EU Member State, thus creating a mutually beneficial, simple and inclusive outcome, so that the interests of the UK and other WTO members are protected.

9.19 The UK will also pursue our long-held pro-trade and pro-development stance in the relevant international institutions and organisations, such as the G7 and G20, the UN and the OECD, with enhanced vigour.

Next : Ensuring the UK Remains the Best Place for Science and Innovation