If we are to be able to deliver the radical changes proposed in this manifesto as well as restoring the health of the public finances, we must be honest with people about how these policies will be paid for. That is why we have set out here how our tax package will be funded, where we intend to increase spending and where we plan to make savings.

The savings identified below are only the start of a programme to tackle the deficit and in government we will go further, holding a comprehensive review of all government spending, on which we will consult fully with the public. This will identify the remaining savings which will need to be made to balance the government’s books. This comprehensive review will not reverse or undermine any of the spending commitments we make in this manifesto.

Over and above our planned new levy on the profits of banks, we will seek to eliminate the deficit through spending cuts. If, in order to protect fairness, sufficient cuts could not be found, tax rises would be a last resort. While it will be impossible to remove the Government’s tax rises while the deficit is so huge, the increase in National Insurance Contributions is a damaging tax on jobs and an unfair tax on employees, so when resources allow we would seek to reverse it.

Following the election of a Liberal Democrat Government, an emergency budget and interim spending review would be held by no later than the end of June 2010.

This budget and spending review would have four purposes:

• To put in place the necessary tax changes in order to raise the personal allowance to £10,000 for the start of the financial year 2011–12.
• To put in place cuts which could be realised within the financial year, such as scrapping the Child Trust Fund or restricting tax credits, to release money for our jobs and infrastructure package.
• Subject to our five economic tests being met, to put into place cuts for 2011–12 identified in our manifesto.
• To confirm the departmental spending shifts necessary to deliver our core manifesto commitments. We will establish a Council on Financial Stability, involving representatives of all parties, the Governor of the Bank of England, and the Chair of the Financial Services Authority. This group would agree the timeframe and scale of a deficit reduction plan to set the framework (though not the detail) for the Comprehensive Spending Review and seek to promote it externally and domestically. Any such agreement would be without prejudice to parties retaining and advocating distinctive views on a wide range of issues, such as fair taxes and spending priorities.

Throughout the summer and early autumn a Comprehensive Spending Review of all departments would be conducted with the objective of identifying the remaining cuts needed to, at a minimum, halve the deficit by 2013–14. A Strategic Security and Defence Review would form part of this spending review, working within the same financial and time constraints.

This review will focus particularly on savings that can be made across government – such as on pay, public sector pensions, and IT provision – and on low-priority spending. It will not reverse or undermine any of the spending commitments that we make in this manifesto.

In education, that means that additional funding for schools through the Pupil Premium will continue to be delivered throughout the next Parliament. Instead of ring-fencing education, we are doing better than that by bringing in new money to fund the Pupil Premium.

In health, our first priority will continue to be to increase spending in some parts of the NHS by cutting waste in others. We do not plan to make net cuts in spending on front-line health services.

The cross-government economies needed to reduce the deficit such as on pay, pensions, and IT procurement will affect all departments, so it would simply be dishonest to say that entire departmental budget can be ring- fenced from cuts. For example, it is only because we refuse to ring-fence departments from the search for savings that we have been able to identify the funds for the Pupil Premium and to protect frontline health services.

The results of this spending review would be widely consulted on with the public sector and general public throughout the end of 2010 and beginning of 2011. Based on this consultation a full spending review up to 2013–14 would be published alongside the 2011 Budget. 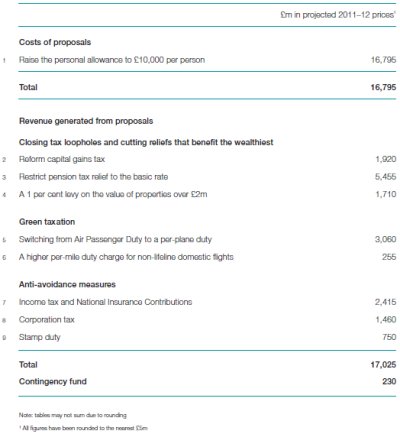 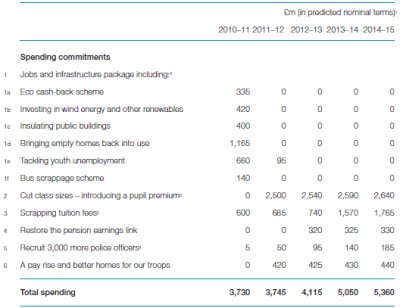 Note: Totals may not sum due to rounding 1 All figures have been rounded to the nearest £5m 2 The jobs package with the exception of parts 1c and 1e is for England only. Barnett consequences for the remainder are accounted for in lines 33 to 35 3 Costs are for England, Barnett consequences for the devolved administrations are accounted for in lines 33 to 35 4 Costs are for England and Wales only, Barnett consquences for Scotland and Northern Ireland are accounted for in lines 33 and 35 5 This proposal is an alternative to the Government’s proposal to cap public sector pay at 1% 6 Scottish and Welsh Liberal Democrats have set out their own budget plans for Scotland and Wales 7 As set out in this manifesto, a Liberal Democrat Government would resolve the disputes and anomalies between the UK and Scottish Governments over the Registers of Scotland and the Scottish element of the Fossil Fuel Levy, with the consequence of adding up to £250m to the resources controlled by the Scottish Government in 2011–12.

Liberal Democrat Manifesto 2010 : Your Money Dealing With The Deficit