We’ve all heard of a dance off, but what about a political Twitter off between a Conservative MP and an English actor/writer? 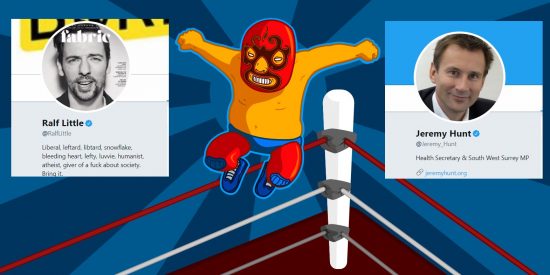 Posted below is the full Twitter storm in chronological order…

It all started way, way back last month :-) when Ralf Little accused Jeremy hunt of lying and a double dare challenge was slapped down on Twitter. 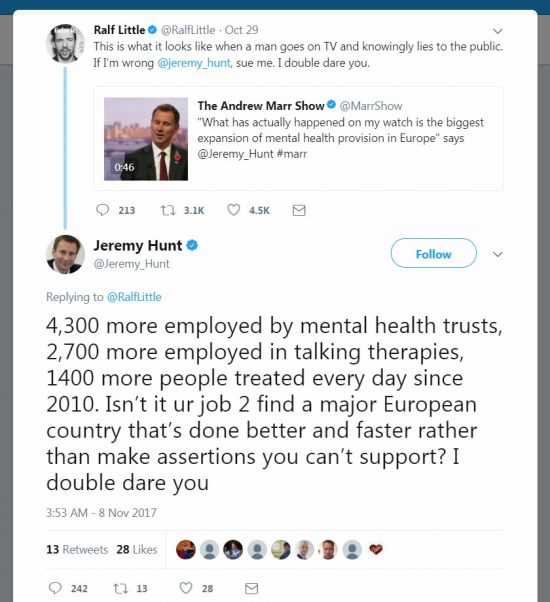 (1) Firstly @Jeremy_Hunt, if you think that’s my job you seriously overestimate the responsibilities of actors. However, in response…

(2) You said to find a European country that’s “done better” & “faster” than your quoted statistics. But firstly, are those stats legitimate?

FactCheck already proved you lied about mental health worker numbers, which you had to admit to… https://www.channel4.com/news/factcheck/jeremy-hunt-admits-making-false-claims-over-mental-health

(4) So before I start with my task at hand, let’s examine your latest stats more carefully.
“4,300 more employed by mental health trusts”

(8) The future doesn’t look great either – training for new psychiatry specialists fell to only 69% of places filled this year after two rounds https://www.nwpgmd.nhs.uk/sites/default/files/CT1%20Fill%20Rate%20and%20Competition%20Ratio%20-%202017_1.pdf

The mental health workforce in England is around 210,000 staff…

(10) Therefore an additional 4300 more “employees”, (not necessarily doctors or nurses), is JUST a 2% increase over 7 years. Meanwhile the WORKLOAD INCREASED by 28%.

(11) Now I appreciate this is a difficult problem to overcome, but it’s your job. Firing out misleading stats on Andrew #Marr and Twitter helps no one, except perhaps you.

(13) Seems ok at 1st glance, but unfortunately for you, https://fullfact.org/ have stated this figure is UNVERIFIABLE as they have changed the methods of measuring mental health user statistics over the time period.

(14) In addition, this figure was then confirmed UNVERIFIABLE by NHS Digital, the very people who created the graph in the first place! https://fullfact.org/health/has-number-people-using-mental-services-increased/

(15) So in actual fact you are quoting a figure to state your position and measure your successes… that NO ONE CAN CONFIRM.

(16) I don’t blame you – if no one kept a record of Oscar winners I’d be telling everyone I’ve got four. #quadrupleOscarwinner #Boom

(17) There’s another problem with this claim of yours. To get technical, quoting this as people “treated” is also misleading, as what the graph specifically shows is number of people “IN CONTACT WITH” a doctor.

(18) In the REAL world, outside of graphs and stats, that’s an important distinction that someone in your position really should be aware of.

(20) In terms of patient experience and care, that’s a HUGE difference.

To reword this statistic from “in contact with” to “treated” is horribly inaccurate, misleading, and simply NOT THE REAL TRUTH.

(21) So… Either you know it’s a lie and you said it anyway, or you were genuinely unaware of the distinction.

Instead of name calling, I’ll choose to believe you were unaware and said it in good faith.

(22) The good news is, now that you – and Twitter – know that this statistic is total bullshit, you won’t feel the need to use it again.

On to your final claim…

Well, I think you’re wrong, which might not surprise you.

But what might be a surprise is, I have some good news for you…

As far as I can tell it’s actually closer to 3000 more in talking therapies – an INCREASE on the 2700 you claimed.

(25) As you can see, I’m more interested in transparent discussion than mud-slinging, and happy to concede where appropriate, as in this case.

Well, given what we’ve learned about those numbers you quoted, it’s hard now to find a single metric for what is defined as “better”.

(27) But what I CAN say, based on the real (not “alternative”) facts is the following…

(28) We have far fewer doctors, nurses and beds per mental health patient than 2010, so have in fact gone backwards in that regard.

(29) Even IF the workforce has risen as you say, it is not unreasonable to attribute this to the IAPT programme which started in 2008 – under the previous government.

(30) However, most other staff groups have fallen, and nurses more than any other.

(31) So to answer you succinctly, it may be difficult to categorically state we are doing “better” than other European countries, but it’s pretty straightforward to say that we are doing considerably WORSE than we were in 2010.

(32) I hope this meets the challenge you issued to me.

Now it’s my turn to issue a challenge in return.

(33) As I’ve demonstrated, you have a real problem with cherrypicking statistics to suit your needs. This may be acceptable in other jobs, but this is medicine, this is the NHS… this is SCIENCE.

(35) But the fact remains that cherrypicking statistics is manipulative and damaging to public office, and to the health service. And I’m afraid the science – and the scientists – back me up, no matter how much and how loudly you protest.

I note you invited Prof. Hawking to meet and discuss these matters, and you repeatedly point out on twitter that he hasn’t yet agreed to.

(37) Well, whilst I don’t pretend to possess even a fraction of his intellect, might I take up the offer?

(38) I suggest you and I sit down in real time, broadcasting live online, in the presence of fact checkers and medical professionals. Not about antagonism, but simply to reassure the public that your intention is to protect the NHS – free at the point of use.

(39) Because, Mr. Hunt, no matter what you’ve said, I have to tell you, at this point pretty much no one believes that you don’t want to privatise it, either openly or on the quiet.

(40) And even if your intention IS to privatise it, let’s be honest about it, so the public can vote fairly and with all the facts. The NHS belongs to them.

(41) So let’s not call each other names – if you’re the decent sort you say you are, and often appear to be on twitter, let’s have an open conversation and some transparency on the future of everyone’s healthcare.

The British public deserve it.

(1) Let’s get to the bottom of this issue shall we @RalfLittle? I talked about the biggest expansion of mental health provision in Europe which you described as
‘knowingly lying’

2) Now I know you are a funny bloke and in politics a lot of insults are traded but the question is can you back up what is a very strong claim?

3) Parity of esteem for mental health became law in 2012, so here are the tables that show the 4,300 increase in staff at mental health trusts since 2013…

4) ….more than 2,000 of which are fully qualified (e.g. not the reduction of 167 in the fullfact piece you linked). https://digital.nhs.uk/media/32981/NHS-Workforce-Statistics-July-2017-Provisional-Statistics-CSV-tables/default/NHS_Workforce_Statistics_-_July_2017__csv_files …

5) And here’s how we get the increase in talking therapies staff of over 2000, some of which will overlap with the trust figure because some IAPT services are provided by trusts (although many aren’t)…

7) @ralflittle you pointed out that mental health nurses have gone down. This is correct, even though overall numbers working in mental health have gone up. Why? Because post Mid Staffs we realised…

8) …there were too many hospital wards with dangerously low staffing so in the last five years have increased hospital nursing staff by almost 13,000. Whilst this has been good for hosps, it has been challenging for MH

9) So to fill the gap we now have 8,000 MH nurses in training and have this Sept announced an increase in nurse training places overall by 25% https://www.gov.uk/government/news/health-secretary-announces-nursing-workforce-reforms …

12) But ‘more’ mental health staff does NOT mean ‘enough’ staff and still too many patients wait too long. That’s why we published plans in July for an additional 21,000 posts https://www.hee.nhs.uk/our-work/mental-health

13) My biggest area of concern is actually children and young people, because half of all conditions become established before the age of 14. So we will shortly be publishing a green paper on children and young people’s mental health to address this https://www.gov.uk/government/news/prime-minister-unveils-plans-to-transform-mental-health-support …

14) What about the dosh? Extra staff cost money so this is what the data shows last year alone spending on mental health went up by £575m https://www.england.nhs.uk/mental-health/taskforce/imp/mh-dashboard/ …

15)…with CCGs increasing spend by 6.3% vs an overall increase of 3.7% in their funding – in other words spending up both in absolute terms and as a proportion of NHS spend http://data.parliament.uk/writtenevidence/committeeevidence.svc/evidencedocument/health-committee/work-of-nhs-england-and-nhs-improvement/oral/71222.html …

17) The New York Times praised the expansion of talking therapies as “the world’s most ambitious effort to treat depression, anxiety and other common mental illnesses”


18) We have also seen significant improvements in crisis care including the roll-out of liaison psychiatry to over 90% of A&Es, of which half are 24/7. This may have contributed to a 6% fall in suicide rates https://www.ons.gov.uk/peoplepopulationandcommunity/birthsdeathsandmarriages/deaths/bulletins/suicidesintheunitedkingdom/2016registration …

19) But there is still MUCH more to do. In fact we are only two years in to a five year plan that will see us treating a million more people by 2020/21 compared to when we started. Here’s the plan https://www.england.nhs.uk/wp-content/uploads/2016/02/Mental-Health-Taskforce-FYFV-final.pdf …

20) Now let’s remind ourselves of your claim, that when I said this was the biggest expansion of mental health provision in Europe I ‘knowingly lied’. Here’s the tweet: 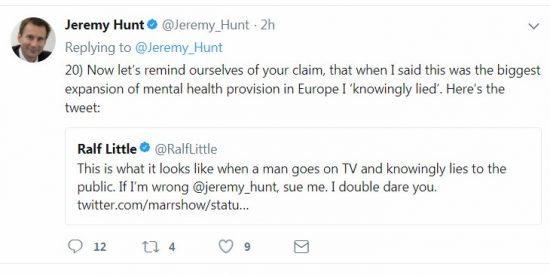 23) There may be a European country with bigger expansion plans but I have yet to find it. I am sure I don’t get everything right but on the basis of the evidence no reasonable person could describe the claim as “knowingly lying’

24) So let’s do a deal: you provide me with evidence that I was – as you claim – deliberately seeking to mislead the public about mental health in my Marr interview & I will happily meet you, factcheckers and all

26) …. I hope you understand that in the rough and tumble of Twitter sometimes we have to put the record straight! I therefore apologise for this interminably long thread and promise this will be my final tweet on the issue.

Share To #KeepTheBan on Fox Hunting, #Foxes Have NO Voice... 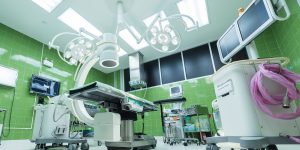 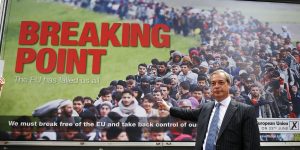 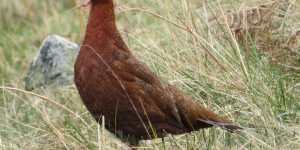 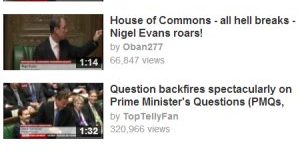