8.42 There are a number of EU agencies, such as the European Medicines Agency (EMA), the European Chemicals Agency (ECHA), the European Aviation Safety Agency (EASA), the European Food Safety Authority (EFSA) and the European (Financial Services) Supervisory Authorities (ESAs), which have been established to support EU Member States and their citizens. These can be responsible for enforcing particular regulatory regimes, or for pooling knowledge and information sharing. As part of exit negotiations the Government will discuss with the EU and Member States our future status and arrangements with regard to these agencies.

8.43 After we have left the EU, we want to ensure that we can take advantage of the opportunity to negotiate our own preferential trade agreements around the world. We will not be bound by the EU’s Common External Tariff or participate in the Common Commercial Policy. But we do want to ensure that cross-border trade with the EU is as frictionless and seamless as possible. These are our guiding objectives for the future customs arrangements with the EU.

8.44 The UK is currently a member of the EU’s Customs Union. As we look to build our future customs relationship with the EU and the rest of the world, we start from a strong position. As a large trading nation, we possess a world-class customs system which handles imports and exports from all over the world. We already have highly efficient processes for freight arriving from the rest of the world – the vast majority of customs declarations in the UK are submitted electronically and are cleared rapidly. Only a small proportion cannot go through so rapidly, for instance where risk assessment indicates that compliance and enforcement checks are required at the border. The World Bank’s Logistics Performance Index shows that HMRC operates one of the world’s most efficient customs regimes.[63]

A customs union is an arrangement between two or more countries designed to allow goods to circulate freely within the area of the customs union, by the introduction of a common external tariff for its members and the removal of tariffs between them. It does not cover trade in services or free movement of capital or people.

A customs union facilitates the movement of goods between its members. However the requirement to have a common external tariff, applied equally by all members, by its nature restricts members’ ability to enter into separate free trade agreements (FTAs) with third countries, by preventing members from applying a different tariff to the common external tariff.

The EU Customs Union is a deep model, which comprises the 28 EU Member States.

Under the EU Customs Union, customs policy is the exclusive competence of the EU. All EU Member States are required to operate customs procedures in accordance with EU legislation (the ‘Union Customs Code’). The UK decides which government department or agency is responsible for implementing and enforcing customs law in the UK. Within the last decade, the UK has seen various customs functions performed by HM Revenue and Customs, the UK Border Agency and Border Force. Currently customs functions are performed by HM Revenue and Customs and Border Force.

Services are not directly included in a customs union (they are subject to neither tariffs nor customs controls) but have become increasingly embedded in goods production. So a customs union could indirectly affect trade in services industries, for example, in parallel to exporting cars, an automotive firm might also provide financial services.

The diagram below shows which countries are members of the various groupings associated with the EU. As set out above, all EU Member States are in the EU Customs Union. A number of additional countries also have a customs union arrangement with the EU, such as Turkey. 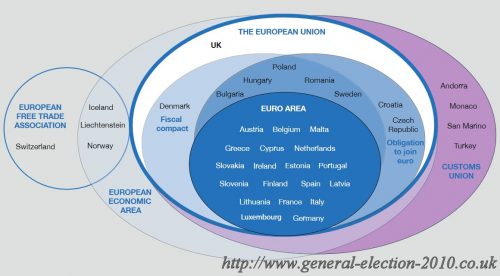 8.45 In leaving the EU, the UK will seek a new customs arrangement with the EU, which enables us to make the most of the opportunities from trade with others and for trade between the UK and the EU to continue to be as frictionless as possible. There are a number of options for any new customs arrangement, including a completely new agreement, or for the UK to remain a signatory to some of the elements of the existing arrangements. The precise form of this new agreement will be the subject of negotiation.

8.46 It is in the interests of both the UK and the EU to have a mutually beneficial customs arrangement to ensure goods trade between the UK and EU can continue as much as possible as it does now. This will form a key part of our ambition for a new strategic partnership with the EU.

8.47 Whatever form that customs arrangement takes, and whatever the mechanism to deliver it, we will seek to maintain many of the facilitations that businesses currently enjoy, whilst aiming that, if there are requirements for customs procedures, these are as frictionless as possible. Whilst we will look at precedents set by customs agreements between other countries, we will not seek to replicate another country’s model and will pursue the best possible deal for the UK.

8.48 Alongside a new arrangement with the EU, we will also look to ensure that the UK’s own customs systems and processes continue to be as effective as possible. We have an open mind on how we implement new customs arrangements with the EU and we will work with businesses and infrastructure providers to ensure those processes are as frictionless as possible, including through the use of digital technologies.

8.49 We are also aware of the specific circumstances faced by businesses in Northern Ireland. We are committed to negotiating a deal that works for the whole of the UK. As with the Common Travel Area, we are committed to working with the Irish Government and the Northern Ireland Executive to minimise administrative burdens, and to find a practical solution that keeps the border as seamless and frictionless as possible, recognising the unique economic, social and political context of the land border between Northern Ireland and Ireland.

8.50 We will want to work closely together with the Irish Government to ensure that, as the UK leaves the EU, we find shared solutions to the challenges and maximise the opportunities for both the UK and Ireland.

8.51 Once we have left the EU, decisions on how taxpayers’ money will be spent will be made in the UK. As we will no longer be members of the Single Market, we will not be required to make vast contributions to the EU budget. There may be European programmes in which we might want to participate. If so, it is reasonable that we should make an appropriate contribution. But this will be a decision for the UK as we negotiate the new arrangements.

Next : Securing New Trade Agreements with Other Countries