The Government will prioritise securing the freest and most frictionless trade possible in goods and services between the UK and the EU. We will not be seeking membership of the Single Market, but will pursue instead a new strategic partnership with the EU, including an ambitious and comprehensive Free Trade Agreement and a new customs agreement.

8.1 It is in the interests of the EU and all parts of the UK for the deeply integrated trade and economic relationship between the UK and EU to be maintained after our exit from the EU. Our new relationship should aim for the freest possible trade in goods and services between the UK and the EU. It should give UK companies the maximum freedom to trade with and operate within European markets and let European businesses do the same in the UK. This should include a new customs agreement with the EU, which will help to support our aim of trade with the EU that is as frictionless as possible.

8.2 We do not seek to adopt a model already enjoyed by other countries. The UK already has zero tariffs on goods and a common regulatory framework with the EU Single Market.
This position is unprecedented in previous trade negotiations. Unlike other trade negotiations, this is not about bringing two divergent systems together. It is about finding the best way for the benefit of the common systems and frameworks, that currently enable UK and EU businesses to trade with and operate in each others’ markets, to continue when we leave the EU through a new comprehensive, bold and ambitious free trade agreement.

8.3 That agreement may take in elements of current Single Market arrangements in certain areas as it makes no sense to start again from scratch when the UK and the remaining Member States have adhered to the same rules for so many years. Such an arrangement would be on a fully reciprocal basis and in our mutual interests.

8.4 Both the UK and EU Member States benefit from our close trading relationship. The EU is the UK’s largest export market[35] and the UK is the largest goods export market for the EU27 taken as a whole.[36] However, the EU currently exports more to the UK than vice versa. In 2015, while the UK exported £230 billion worth of goods and services to the EU, the UK imported £291 billion worth of goods and services from the EU.[37] The UK’s £61 billion trade deficit with the EU was made up of an £89 billion deficit in goods and a £28 billion surplus in services.[38] 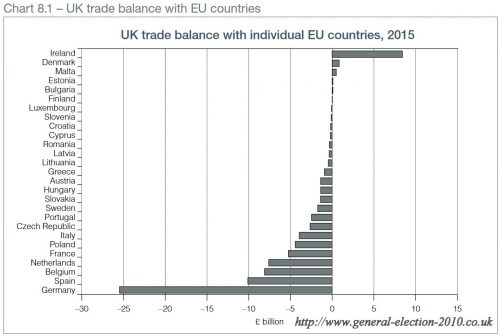 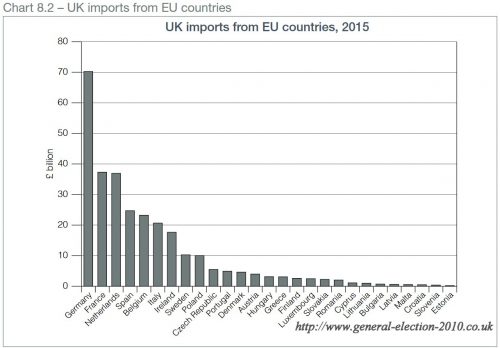 8.6 Close trading relationships with the EU exist across a range of sectors. The UK is a major export market for important sectors of the EU economy, including in manufactured and other goods, such as automotives, energy, food and drink, chemicals, pharmaceuticals and agriculture. These sectors employ millions of people around Europe.

8.7 The UK exports a wide range of products and services to the EU. For example, exports of motor vehicles, chemicals and chemical products, financial services and other business services all account for significant shares of total UK exports to the EU. 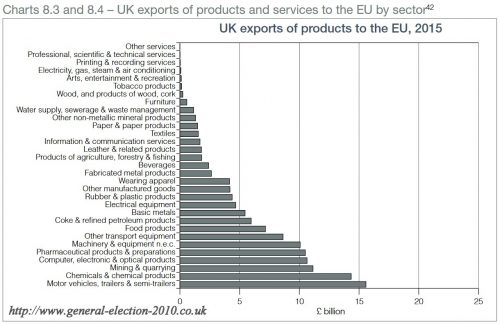 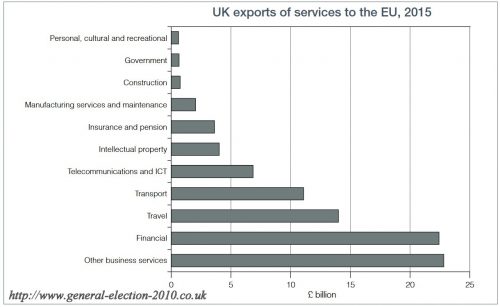 8.8 Producers in other EU Member States also rely on UK firms in their supply chains and vice versa. The integration of supply chains, which also benefits the UK, means that the UK often contributes a significant share of the foreign content in the EU countries’ exports. Chart 8.5 shows the UK share of foreign content in EU exports, which varies from two per cent for Bulgaria to over 17 per cent for Malta.[45]

8.9 This applies to services sectors, which are a growing component of global supply chains; and to many goods sectors, where parts and components move backwards and forwards across borders. For example, in Aerospace the wings for the Airbus A350 XWB are produced in the UK. The wings are made from many parts, drawing from expertise and excellence across the UK and EU. Although the wings are assembled in North Wales, they are designed and produced through cooperation between specialist teams in Germany, Spain, France and Filton, near Bristol.[46] 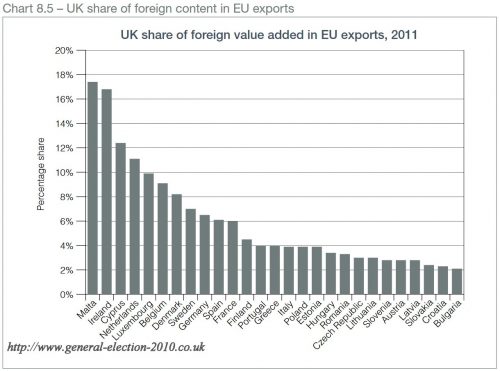 Next : The UK Economy