We will remain an open and tolerant country, and one that recognises the valuable contribution migrants make to our society and welcomes those with the skills and expertise to make our nation better still. But in future we must ensure we can control the number of people coming to the UK from the EU.

5.1 As we leave the EU and embrace the world, openness to international talent will remain one of our most distinctive assets.

5.3 However, in the last decade or so, we have seen record levels of long term net migration in the UK,[13] and that sheer volume has given rise to public concern about pressure on public services, like schools and our infrastructure, especially housing, as well as placing downward pressure on wages for people on the lowest incomes. The public must have confidence in our ability to control immigration. It is simply not possible to control immigration overall when there is unlimited free movement of people to the UK from the EU.

5.4 We will design our immigration system to ensure that we are able to control the numbers of people who come here from the EU. In future, therefore, the Free Movement Directive will no longer apply and the migration of EU nationals will be subject to UK law. 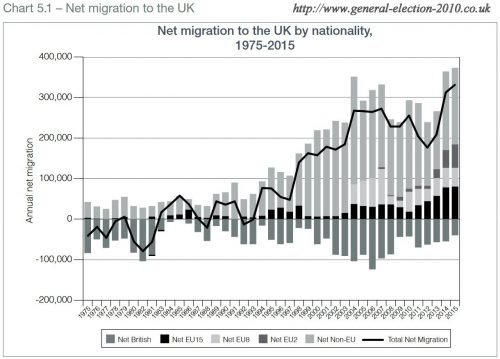 Our approach to controlling migration

5.5 Immigration can bring great benefits – filling skills shortages, delivering public services and making the UK’s businesses the world-beaters they often are. But it must be controlled.

5.6 We will create an immigration system that allows us to control numbers and encourage the brightest and the best to come to this country, as part of a stable and prosperous future with the EU and our European partners.

5.7 The UK will always welcome genuine students and those with the skills and expertise to make our nation better still. We have already confirmed that existing EU students and those starting courses in 2016-17 and 2017-18 will continue to be eligible for student loans and home fee status for the duration of their course. We have also confirmed that research councils will continue to fund postgraduate students from the EU whose courses start in 2017-18.

5.8 The Government also recognises the important contribution made by students and academics from EU Member States to the UK’s world class universities. A global UK must also be a country that looks to the future.

5.9 We are considering very carefully the options that are open to us to gain control of the numbers of people coming to the UK from the EU. As part of that, it is important that we understand the impacts on the different sectors of the economy and the labour market. We will, therefore, ensure that businesses and communities have the opportunity to contribute their views. Equally, we will need to understand the potential impacts of any proposed changes in all the parts of the UK. So we will build a comprehensive picture of the needs and interests of all parts of the UK and look to develop a system that works for all.

5.10 Implementing any new immigration arrangements for EU nationals and the support they receive will be complex and Parliament will have an important role in considering these matters further. There may be a phased process of implementation to prepare for the new arrangements. This would give businesses and individuals enough time to plan and prepare for those new arrangements.

The main EU Treaty provisions relevant to the free movement of people (and associated provisions on social security and welfare provision in cross-border situations) are:

•• Article 18 of the Treaty on the Functioning of the European Union (TFEU) on non-discrimination;

•• Articles 20 and 21 TFEU which deal with EU citizenship and free movement rights;

•• Articles 45-48 TFEU on the free movement of workers and social security coordination; and

•• Articles 49-53 TFEU as they relate to the freedom of establishment of selfemployed persons.

Free movement rights can be exercised by EU citizens, their dependants and – in certain circumstances – other family members. These rights are largely set out in the EU Treaties and in secondary EU legislation. These rights have also been extended to nationals of the European Economic Area (EEA) states who are not members of the EU (Iceland, Norway and Liechtenstein) and to Switzerland by virtue of two separate agreements. EU citizens also have the right to exercise free movement rights in these states.

Previous : Protecting Our Strong and Historic Ties with Ireland and Maintaining the Common Travel Area